Early last year the first Squashercise class at Bluecoat Sports was held. Since then there has been a real change in attitude towards the ‘manly’ game of Squash. When looking through the glass-backs onto courts 1&2, you could be forgiven for thinking the game was all about testosterone, hard hitting and shouting.
Squashercise started as a type of circuit class, consisting of Squash specific exercises and hand-eye co-ordination work. Although the Classes were fun, they were still no substitute for the game itself. 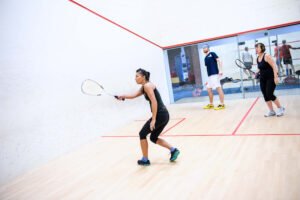 I was delighted to tell the regular attendees that the class would evolve into a ladies Squash morning; the likes of which haven’t been seen since as far back as the 80’s, when Squash was at its peak popularity. My delight was built upon when attendance went up after the class’s evolution and the players hunger for knowledge and skill increased.
Since then the class, and the game, has been used by a large group of women for various different things.
Some have found a perfect substitute for Tennis on a rainy day. Others have found it a good use of time when waiting for family and friends to finish one of the other many Classes and activities we have available.

Most notably perhaps, some of the “squash girls” have come to me and expressed their delight in losing pounds and inches since they took up Squash. 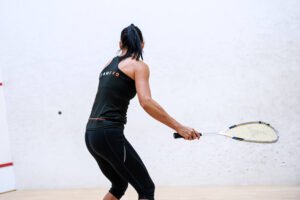 The biggest success from the last year of Squashercise though, has been the beginning of the first ever Bluecoats Ladies Squash League. The emergence of a Ladies League was a long term goal of mine, so you can understand my satisfaction when the girls came to me asking (demanding) for one to be arranged.
For those of us who struggle to concentrate and commit to Gym work, sport is the perfect solution.
With 11 ‘Mens’ leagues and 2 Ladies Leagues, there is ample opportunity to get involved with the game that is claimed to be the ‘Healthiest Sport in the World’
Squashercise takes place every Monday 9.30am-10.30am
If you wish to join either of our Squash Leagues, please place your details on the appropriate form, located on the Squash Notice Board, between courts 1 and 3.
Best wishes,
Kit Pearman
Club Coach, NO.1, Poster Boy