Bluecoats Member Ben Jennings has taken the time to provide an account of the sheer determination, focus and devotion that goes into training for a body building competition a process he completed at the beginning of the summer… 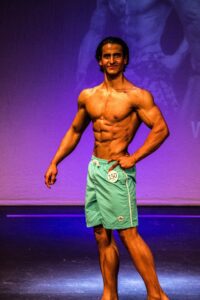 “I am especially fond of Bluecoats and I always speak very highly of the Gym and recommend it to friends. I recently competed in a Physique Bodybuilding Competition (UKUP Junior Physique) I was placed second, qualifying for the UK finals. 100% of my training I carried out at Bluecoats. In my opinion there seems to be a common perception amongst young people who live near to Horsham that Bluecoats doesn’t provide the facilities that are suited to their primary goals of bodybuilding and strength training. I think that this conception is misguided and Bluecoats is brilliant for helping anyone achieve their fitness goals and I would like to encourage people looking for a gym, from all fitness goals to give Bluecoats a try. I hope that my personal achievements would be obvious evidence of the clubs potential to help people achieve their goals as it has certainly been my guided tool.

The training I went through in preparation for my contest in Sevenoaks was incredibly tough, perhaps one of the hardest things I have done. It was not just the physical ardor but the psychological strain and grinding that comes with weeks of strict dieting, hours of fasted cardio and heavy weight training that I found so difficult. 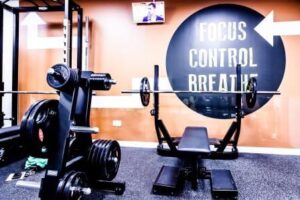 About 8 weeks before I would exercise at Bluecoat Sports for up to 3 hours per day 6 days a week-utilising the state of the art Gym, Swimming Pool and Indoor Cycling studio. During this time I also worked full time as a bartender in Bill’s restaurant which made the training even more difficult as I often worked long days only to cycle home and go straight to the gym, the time when some would relax and unwind I pushed myself forward to make the steady progress towards my goal. This whole process felt like it would never end.

Eventually stepping on stage and presenting my hard work successfully made it all worth it because I had such good support from the large crowd who were all chanting my name while I executed my posing routine.  Hearing this kind of support from strangers was spectacular.  When I was placed runner up the feeling of accomplishment was overwhelming because I put so much work into getting in shape. It really solidified the principle of hard work that I became familiar with during my A-levels last year: namely the more you put in, the more you get out.

I graduated from Christ’s Hospital School last year where I studied Philosophy, History and Economics at A2.  I have a place to study Philosophy at University College London (UCL) where I started in September after I came back from travelling through the USA over the summer holidays.

I decided to take part in a bodybuilding competition largely because of the sheer difficulty of it and I wanted a project to keep me occupied with during my gap year that would make me a stronger person. After surviving the contest prep and succeeding I feel that I can deal with future challenges unrelated to fitness more confidently as hard work, resilience and persistence that encompass bodybuilding competitions along with additional skills that can be applied to most aspects of life”