We’re delighted that 12th September 2020 marks the 30th anniversary of the opening of Bluecoat Sports! We’ve come a long way since our humble beginnings and have really enjoyed providing students and the local community with a state-of-the-art health and fitness centre over the last 30 years.

Below, we look back on where we started, including the longest serving team members, BCS members and our work within the community. We’d love to hear your stories and see your pictures of Bluecoats from across the years, so please share your stories and images with us on social media. 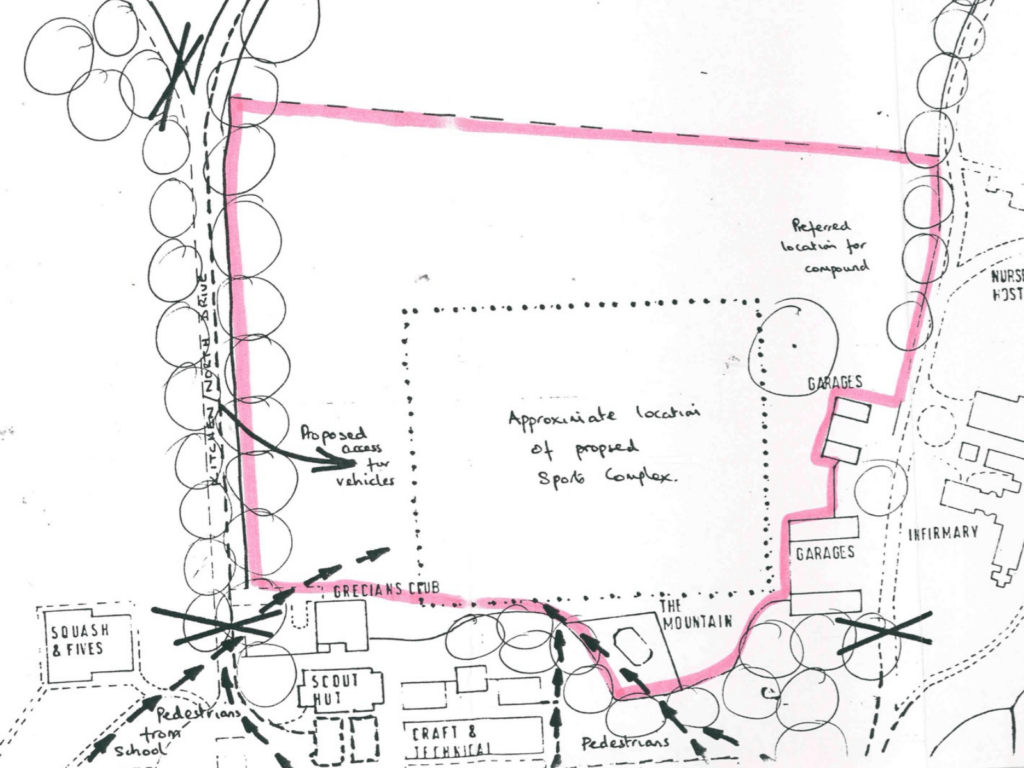 The idea of Bluecoat Sports was formulated to give Christ’s Hospital students, local sports communities and the local residents access to a state-of-the-art centre where they could train and stay fit and healthy.

Designed by architect David Hutchinson and built by Walter Llewellyn and Sons in 1990, the original building featured the following facilities for users: 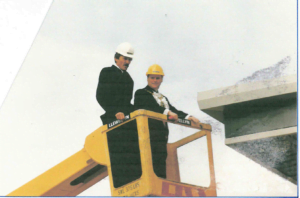 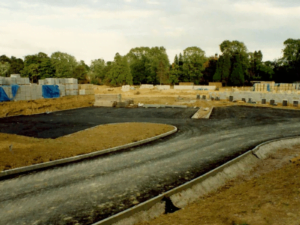 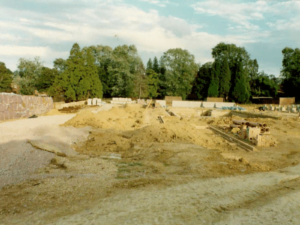 The first image shows Hugh Bidwell, Lord Mayor of London, with Michael Oliver-Llewellyn, up in a cherry picker for him to perform the official topping up ceremony. This involved him inserting some stainless steel screws into the fascia at the highest point externally of the squash court area. A magical and memorable day!

On 12th September 1990, the Duke of Gloucester officially opened Bluecoat Sports to the public, where it was described by visitors as ‘one of the finest centres of its kind in the country’. 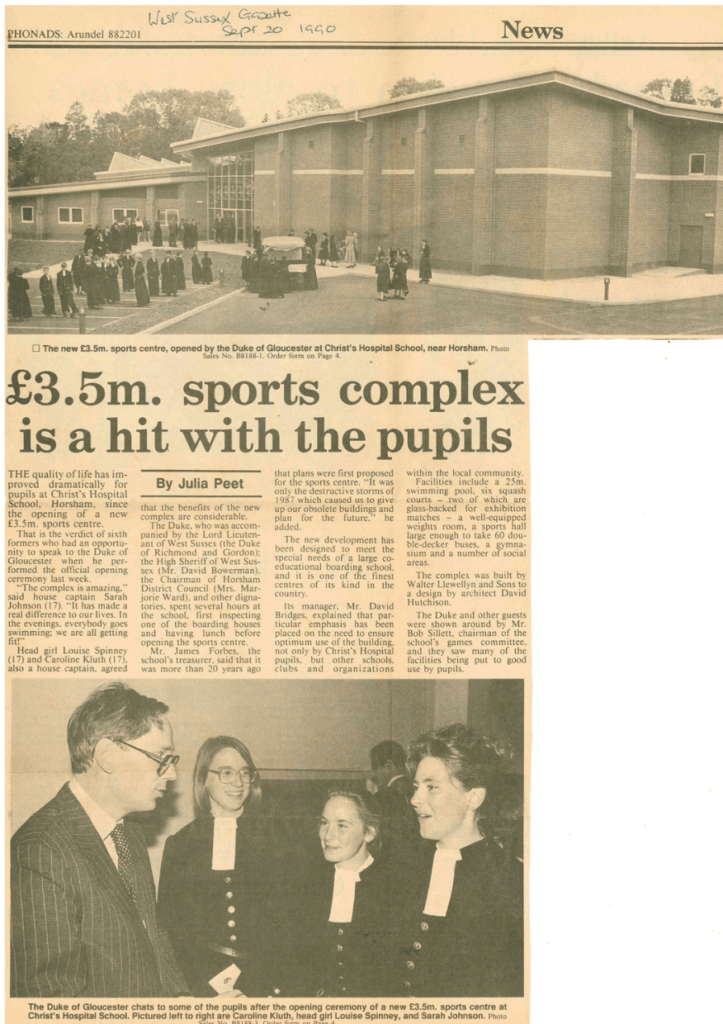 David Bridges was the first leisure centre manager who was brought in to run the facility. He was recruited locally as he had previous experience successfully running other leisure centres in the area and when he joined, the building works were still ongoing.

David’s brief was to run the centre for Christ’s Hospital school and its pupils, and more importantly open it to the wider community for their use too. The original idea was that local sporting groups would be able to hire facilities to train in and look after themselves and the needs of their team. This marked the first time that the school was opened to the wider Horsham community. Following the success of this, David started adding swimming classes and aerobic classes using his local contacts, these were open to the local community to attend and were on a pay as you go basis.

Bluecoat Sports gained a strong reputation in the area and because of this, David introduced a membership option on a limited basis. Although this was limited at the beginning, David had no idea how popular this would become and how much it would be used by members of the public. Following this, the café and the crèche were introduced, giving the local community another benefit to attending Bluecoat Sports.

We’re proud to have many long standing employees, with a lot of our staff members having worked with us for years. This is true for Melanie Marlow who is one of the longest serving employees – joining us on 15th January 1991.

Mel originally applied for a job as a cleaner and then ended up being hired to set up the crèche, as she was already a childminder and had experience working with children. The crèche was originally located in what is now the Fitness Suite and had 12 children to start. It was then moved to Studio 2, before finally ending up in its current location in Studio 1.

When Mel joined the team, there were only 6 members of staff to start with, two Duty Managers, an office administrator, a receptionist, a lifeguard and a cleaner. At the time there were no computers or mobile phones, there was just a money box at reception and a day book for visitors and members.

Over the years, Mel has worked in many different areas of Bluecoat Sports. These include:

She ran one of the first ever aerobics classes in the gym and also set up Mighty Movers (now our Mighty Minis) and Mel’s Milers, which allowed members to run around the Christ’s Hospital grounds during the day. With access to the crèche, this was a very popular activity. She even taught several of the current staff to swim when they were children!

Speaking about working at Bluecoats. Mel said the place had a family feel and you felt part of a team:

“It was an exciting time setting up the Centre. We were a small team and we had to wear a lot of different hats. I was brought in to set up the crèche but also taught swimming, gym classes, athletics to Christ’s Hospital, set up Mighty Movers (now Mighty Minis) and did some of the Marketing. One of the highlights was attending a lunch in the dining hall when Queen Elizabeth II visited the school.’’ 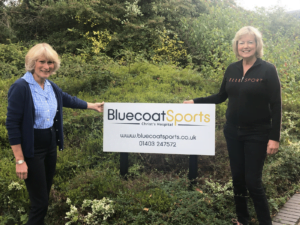 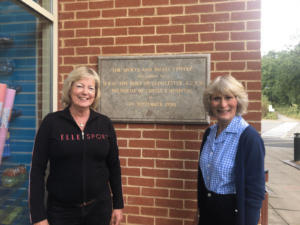 Melanie Marlow, one of our longest serving employees and Rosalyn Case, our first ever member.

Our members are extremely important to us and we do all we can to ensure that they have an excellent experience at Bluecoat Sports. This is why we’re delighted that our very first member, Rosalyn Case, is still a member today!

Ros joined Bluecoat Sports in 1991 and is literally member number 01 on the system. When she first joined, things were very different to how they are today, with the pool only being available one hour a day and some facilities having restricted times.

During her time at Bluecoats, Ros started up an ‘early bird swimming club’ and was part of the first members panel to give feedback to the club. She still attends Bluecoat Sports today and uses the swimming pool most days.

“I was the first person to join the club (Member 01). Opening times were initially very restricted but once classes started I visited several times a day for different activities. I enjoyed it as it was a friendly comfortable environment and I felt privileged to be there.

I have two fond memories, one was completing a charity step challenge in which we climbed the equivalent in height to Kilimanjaro. The other was a charity swim in which I was one of three to complete a mile (64 lengths of the pool) of non-stop butterfly. Both unforgettable.”

Bluecoat Sports and Christ’s Hospital in the community

Bluecoat Sports is a registered charity which was set up to benefit the pupils at Christ’s Hospital and the wider community by providing sporting facilities. Any surplus that we generate is used to enhance our provision and so improve the wellbeing of the School’s pupils and our members. Pupils at Christ’s Hospital are supported financially by the School’s generous bursary scheme and many would not otherwise have the benefit of the excellent academic and sporting programme, including the facilities provided by Bluecoat Sports.

We spend a lot of time supporting local causes and giving back to our community. Most recently we have supported many charitable causes including:

We are also proud to sponsor a range of local events and help raise awareness and money for:

The future of Bluecoat Sports 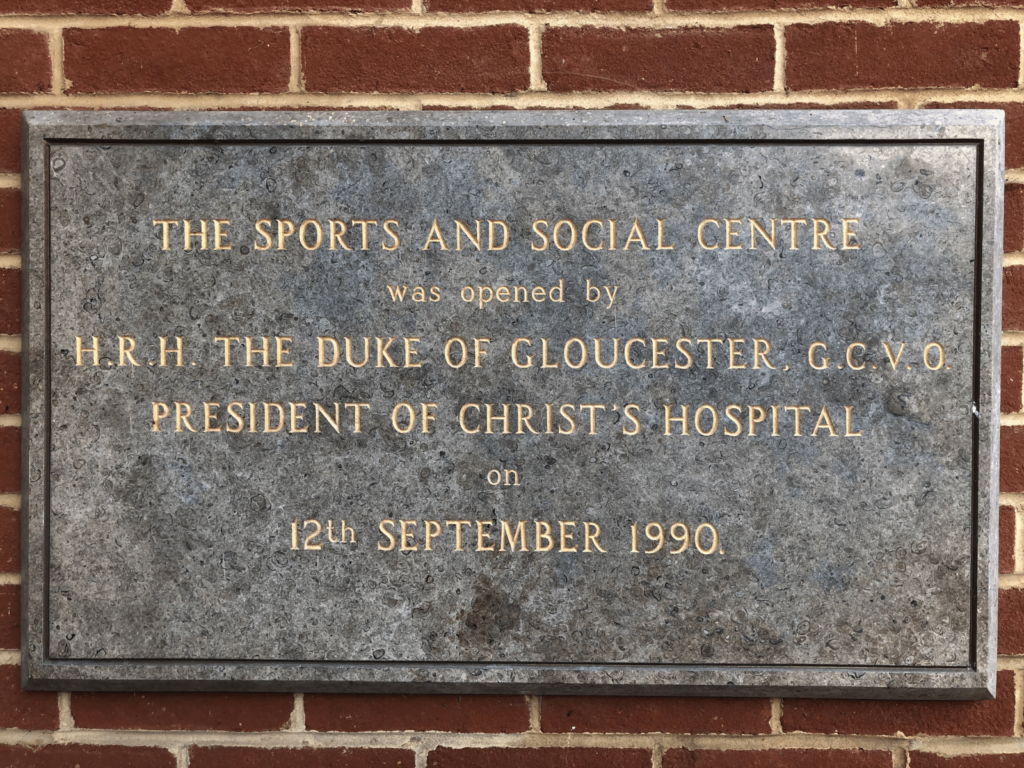 In 2018, we introduced the BCS app which gives users the ability to find and book class, as well as check the class and pool timetables. It also gives members the opportunity to set goals and targets for a specified time frame and accurately keep track of their progress.

We’re proud of our journey so far and we hope to continue to improve our service and offering to Christ’s Hospital and the wider community in the future. If there are any suggestions of things you’d like to see at Bluecoat Sports, please do let us know, we take on board all our members suggestions and would love to hear from you.